It was early fall in Alabama. The leaves had quickly gone from green to brown (no golden orange for us Southerner’s) and my family was taking time out between football games on television to braid rope.

Dad was standing in the middle of the den, desperately trying to listen to Eli Gold and peek through the rust colored fabric Mom had draped over head, while Mom quickly cut a hole for his head before he missed another touchdown. She had come home the day before with the brown fabric- enough to make monk robes for the whole family. It was my job to braid belts out of the wiry rope that she had bought along with the material.

Reformation Day was coming, and we needed to be properly attired.

For those of you not of the Reformed tradition, Reformation Day is October 31st. It’s the day that Martin Luther nailed his 95 Theses on the door of the town church in Wittenberg in 1517. It’s commonly believed that his writings (in this case, regarding the sale of indulgences by the Catholic Church) began a religious reform that is now known as the Protestant Reformation. It’s because of this that most protestant denominations exist.

Luther chose All Hallow’s Eve (Halloween) to post his writings on the church door because it was a popular day for the common people to view relics in the church, and get brownie points towards eternal life.

I grew up the daughter of Presbyterian pastor and a history major. Add to that a healthy eleven year stint as a homeschooled student, I was raised not only to recite the Westminster Shorter Catechism (both versions), but to also know the history behind the various creeds, councils, and acts of reform in the history of the Christian church.

Reciting the decisions made in the Council of Trent made for an excellent party trick later in life, if I knew my audience.

I can’t quite remember when the tradition started for my home church, but sometime around fourth grade we began a Reformation Celebration on October 31st. It was our own bizarre-Presbyterian-style take on the Trunk-or-Treat/ Fall Festival event. I say “bizarre” because we were the only Presbyterian church of our size in the surrounding area and the general population didn’t really know or care about Luther, Knox, and the Anabaptists. It may also be because when people drove by the church, they saw families walk in dressed like Franciscan monks.

Not everyone dressed like they had taken their vows; we had a loose dress code but most

people stayed in the spirit of the event and dressed like great men and women of the church. After a few years of dressing like a nun or German peasant, I sweetly asked if I could dress as the beheaded Mary Queen of Scots. I was promptly denied, and had to settle for Anne Boleyn.

We had different Sunday school rooms redecorated to represent 1500’s Germany, Scotland, and the city of Geneva. My dad, if memory serves correct, was always Martin Luther. He transformed his office into a monastic cell and gave a short lesson on the significance of Luther’s work and how transformative a belief in sola fide, sola scriptura, and sola gloria can be to a person who thinks they earn their way to heaven.

As the years went on, the event grew bigger. One year, an obstacle course was built in the fellowship hall and we had to carry Bibles through it like the smugglers did to get the first English copy to England. Another year, the smuggling became more intense and we had several elders capture anyone carrying a Bible and put them in “jail” for 5-10 minutes. Usually candy was involved; the cliche fishing game was turned into a reference to Katharina Von Bora’s escape from a convent in herring barrels. 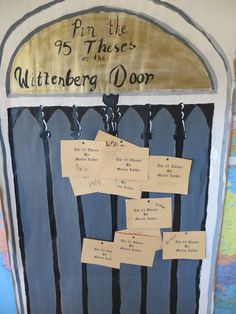 Usually at the end of the night, we gathered in the sanctuary and anyone who wanted to explain who and why they dressed up we given the opportunity. We were able to spend about forty five minutes to an hour learning about different people who gave up their lives (or their tongues, fingers, feet— the Reformation was a truly brutal time of persecution) to show others the gospel that we took for granted on a daily basis. Each year, we tried to find new reformers that hadn’t been focused on the year before.

From the outside looking in, it really was an odd night. But it gave us, as a community, a chance to honor simple men and women who aren’t commonly known about in today’s culture.

At the heart of dressing up in a character’s clothes and makeup is the desire to emulate characteristics they possess. I dress up Gracie as a princess so that she knows she’s special, and that she can wear pretty dresses and a crown. Gracie wants to be SharpTooth from The Land Before Time this year… and while it’s the villain in the 15-part movie series, she likes to run around and roar at the dog and random people.

My parents, and others in my home church, took this concept and used it as a teaching tool for their children. As we were dressing like Luther or Boleyn, we learned about what made them stand out in history. It wasn’t because they were special by birth and wore a crown- Luther was poor as dirt and spent most of his life being hunted by his enemies. And while Anne Boleyn did wear crown, she used her power to help others in need. We learned early in life that it wasn’t what we wore or some magical powers that made us stand out in history- it was the small actions that can often cost us friends or social status.

And that’s why Gracie will be SharpTooth and Anne Askew this year.